Click here to get tickets and see the concert schedule at Davies Symphony Hall. 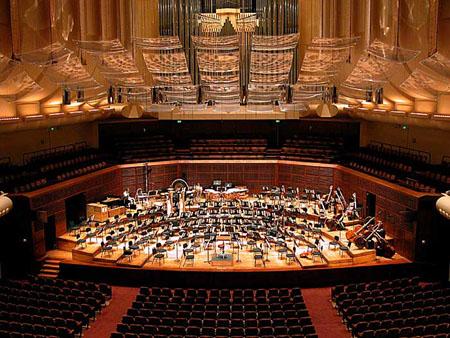 The hall was designed by Skidmore, Owings & Merrill and Pietro Belluschi, with acoustic consultants Bolt, Beranek and Newman. The design of the concert hall has been praised both for it’s exterior and interior.

The acoustical architecture of the concert hall has several features, as well as modifications made after the initial construction to improve it’s result. Above the stage are convex acrylic reflecting panels that are movable and means the acoustics can be modified to suit the orchestra and audience. There are also adjustable fabric banners around the auditorium which change reverberation time from 1 to 2 1/2 seconds.

Another main feature of the hall is that the interior is split into seperate buildings. The inner performance space is contained within it’s own building, seperate to the lobby.

In 1992, 12 years after initial construction the hall was renovated to improve its acoustics. This was carried out by Kirkegaard Associates, costing $10 million.

The Fratelli Ruffatti electro-pneumatic pipe organ was added to the hall in 1984. When installed the organ was the largest concert hall organ in North America and has 9,235 pipes and 163 ranks, the largest of the pipes being more than 32 feet high, the smallest being the same size as a ballpoint pen. The organ is named after the manufacturer, Fratelli Ruffatti, who is based in Padua, Italy.

Davies Symphony Hall also contains three separate rehearsal spaces in the Robert H. Zellerbach Rehearsal Hall. One of these spaces is the exact same size as the Opera House stage on the other side of the street to allow rehearsals for opera and ballet. The hall also has offices, music library, dressing rooms, recreation room and lockers and a private dining room for major donors called the Wattis Room.

A bronze sculpture called ““Large Four Piece Reclining Figure” sits outside the hall and was made by English sculptor and artist Henry Moore. The view from the lobby of the hall makes for a beautiful setting for parties and receptions as it overlooks the San Francisco City Hall and the War Memorial Opera House.

The hall itself was named after it’s most generous donator to it’s creation, Mrs. Louise M. Davies and is dedicated to the joy of music. The hall took two years to construct and over six thousand individuals, foundations and corporation donated to it’s construction. Costing $28 million, State and Federal governments gave $10 million towards it while The City of San Francisco donated the land. The renovation in 1992 was privately funded and cost $10 million.

Presently, the Hall is the home of the San Francisco Symphony and so the majority of concerts are classical. However, it also occasionally hosts performances from contemporary musicians and bands.

You can find a list and description of the upcoming concerts showing at Davies Symphony Hall here, as well as buy tickets (where available), find the address, get contact details and see the seating chart. You can also like and follow us on Facebook to get updates on the latest concerts, and follow us on Twitter for concert updates.